Everything On Track For Tokyo Says NZOC Boss 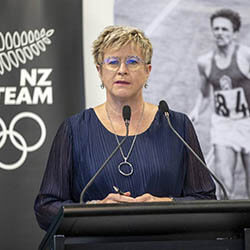 New Zealand Olympic Committee boss Kereyn Smith says everything remains on track for the country’s participation in next year’s Games in Tokyo. Despite several challenges posed not only by the actual postponement of the event, but also a re-jigging of qualification events across all sports and formats, Smith says the sending of New Zealand’s biggest-ever team to Tokyo remains on the agenda.

Should everything indeed end up going ahead as planned, New Zealand will next year for the first time ever reach a double-hundred mission – with between 200 and 220 athletes anticipated to make the trip to Tokyo.

Those athletes already awarded a spot can rest assured in the knowledge that their berths are signed and sealed, said Smith, who labelled the situation around qualification opportunities a complex scenario.

New Zealand’s Olympic track cyclists have been very fortunate in that their Olympic team set to compete in Tokyo has already been named. This was only made possible by the fact that no international competitions or events have been scheduled for the months remaining between now and next year July. Smith said she sympathised with the plight of those athletes who have not been so fortunate.

Smith also ventured a guess regarding what the living conditions in Tokyo can be expected to look like for those athletes arriving from New Zealand. She said that the only really important thing to have in place would be a facility suitable for training as well as for managing the mental and physical health of the athletes.