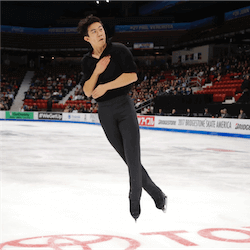 The ISU Grand Prix of Figure Skating Final kicked off on the 7th of December and the top skaters from around the world are currently competing in Nagoya, Japan. The three-day event is a culmination of six weeks of competition across three continents and six countries. The series itself consisted of six global skating events starting off with the Rostelecom Cup in Moscow. This was followed by the Skate Canada International, then the Audi Cup in Beijing and the NHK Trophy in Japan. The final two competitions consisted of the Internationaux de France de Patinage and Bridgestone Skate America.

In the men’s final, American Nathan Chen tops the standings, being to the only competitor to have won two events; the Rostelecom Cup and the Bridgestone Skate America. Shen is joined by Japan’s Shoma Uno who won the Skate Canada event and came second in France. Russia will have two entries with Sergei Voronov and Mikhail Kolyada both picking up a gold and silver in two events.

Adam Rippon from the USA also advances to the final with two silvers along with Boyang Jin who scraped through with one silver and a fourth place at Lake Placid. Both Chen and Uno have competed in a final before and return as defending silver and bronze medallists. Of the men’s finalists, Russia’s Mikhail Kolyada is the only newcomer to the field.

In the women’s competition, Russians Alina Zagitova and Evgenia Medvedeva top the standings with two gold medals apiece. Canadian Kaetlyn Osmond earned her spot with a gold in Canada and a bronze in France. Italian Carolina Kostner qualified with two silver medals, the same as does Russia’s Maria Sotskova. Japans Wakaba Higuchi makes up the squad, qualifying with one silver and one bronze. The woman’s competition has been dominated by Russians with Medvedeva being the two-time and current reining Grand Prix Final Champion. Two competitors will be making their debut in Final including Higuchi and Zagitova.

In the pairs competition, China’s Wenjing Sui and Cong Han picked up two gold medals to top the standings. They are joined at the top by Russia’s Vladimir Morozov and Evgenia Tarasova, who also took gold and silver on their way to Nagoya. The Germans will have something to smile about as Aljona Savchenko and Bruno Massot collected one gold and one silver to qualify. The Canadian pair of Meagan Duhamel and Eric Radford won a single gold and one bronze to book their spot while Russia’s Ksenia Stolbova and Fedor Klimov qualified with two silvers. The Chinese pair of Xiaoyu Yu and Hao Zhang makes up the group, also qualifying with two silvers. Each team has competed in a final before, bringing with them plenty of experience.