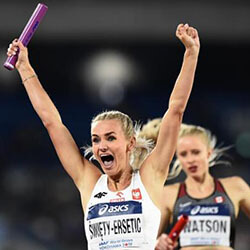 Great Britain secured the 4×100m men’s relay team bronze by one hundredth of a second during the World Relay Championships that took place in Yokohama, Japan. The British team, which consists of Harry Aikines-Aryeetey, Adam Gemili, CJ Ujah, and Nethaneel Mitchell-Blake finished the event in 38.15 seconds, and were just ahead of their closest competitors China, who came in at 38.16 seconds.

Their latest victory marks Great Britain as the world champions of the event. Brazil took gold thanks to a world-record time of 38.05 seconds, while the United States came second with 38.07 seconds. Great Britain’s men’s 4×400m team finished their event in fifth place for the final, while Tobago and Trinidad both claimed hold.

The United States were dominating the events up until the race where Trinidad’s Machel Cedenio completed the final leg 44.41 split, earning the gold in just over three minutes. The US ultimately finished in second place, but were later disqualified due to infringement on a lane, which lead the Jamaican team to be promoted to the second spot with a time of 3:01.57, which Belgium came behind with third place.

Great Britain’s women’s side 4×400m quartet saw them finish for sixth place with Poland taking lead position with a time of 3:27.49. European champion Justyna Swiety-Ersetic outpaced American Courtney Okolo for the final 100m to take hold, which left the United States to finish the event with silver, with Italy following behind them in third place.