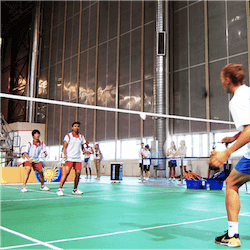 India’s headstrong performance at the 2017 Badminton World Championships fails to disappoint as the team continues their near flawless record for singles shuttlers. The big draw on the 3rd day of the world championships held in Glasgow was Saina Nehwal.

She was the 2015 runner up in the Women’s singles competition and this year she may be in line to take the gold. She made quick work of Sabrin Jaquet from Switzerland in sets that ended in 21-11 and 21-12.

Saina opened the match thunderously, ploughing into a 6-1 lead within minutes. Saina is ranked 16th in the world but showed her true greatness. Jaquet tried to put up an attack and managed to get a 3 point lead when she tipped the 6-1 scales to a 6-9.  The match ended with a 21-11 lead for Saina. Again Jaquet built a lead of 7-9 but after the mid game break, Saina returned to steam roll her Swiss opponent for a 21-12 finisher.

Indian team mate B Sai Praneeth, who previously took the Singapore Open and the Thailand Open, almost ended his run early at the Badminton World Championships. He faced Anthony Sinisuka Ginting from Indonesia. The two battled for over an hour ending the match with 14-21, 21-18, and 21-19 in favour of Praneeth.

All 8 members of the Indian Badminton team won their matches laying a great foundation for the rest of the World Championship. Sai is now set to head to the pre-Quarter Finals. This despite his lacklustre form so far in the World Cup. When facing Ginting, it seemed that he was struggling to keep pace with his younger opponent.

It was really worrying for fans when in their third set Praneeth lost his momentum and had to claw back a win from an 18-12 deficit. He managed to snatch a win from the jaws of defeat by ending the set 21-18.

The Loss Of A Record

The Indian singles side’s flawless record was unfortunately lost when Tanvi Lad lost her singles game to the South Korean opponent Sung Ji Hyun. Hyun was a force to be reckoned with and did not let Tanvi take an inch. The doubles teams were also not in great shape.

India’s un-seeded women’s duo of Ashwini and Sikki crumbled under the assault of Denmark seeds Kamilla Rytter Juhl and Christina Pedersen in a hard fought 3 sets ending with a 22-24, 21-17 and a 15-21

The hour long gruelling match showed that there is allot of talent and strength in these two Indian players and it won’t be a surprise to see them again for the next tournament in even better form than they are now.