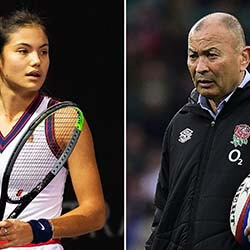 Jones used Raducanu as an admonitory example while addressing the media after England’s victory over Tonga on Saturday. The England coach said the main challenge for upcoming young players is to remain focused and free from distractions. He added that there was a reason why this year’s US Open winner hadn’t managed to continue to do well after her fairy-tale win.

While Jones never named Raducanu by name, he made it clear who he was referring to. He also added that appearing on flashy fashion magazines wearing designer outfits did not help her cause to remain focused.

Jones’ comments prompted an outcry on social media, including a voice of criticism on the part of BBC Sports presenter Gabby Logan. The prominent presenter said Jones’ comments had been totally unfair, a point of view later on backed up by leading tennis coach Judy Murray.

Also weighing in on the situation this week was former British No. 1 JO Durie, who took the drama one step further by referring to Jones’ comments as “sexist”. According to Durie, Jones’ reference to “the girl who won the US Open” had been completely out of line. Raducanu is an eighteen-year old woman, said Durie, and not a young girl.

Raducanu will next be seen in action at the Linz Open.