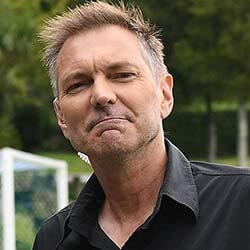 Veteran sports commentator Martin Devlin says he’s “ashamed” for having thrown a punch at a young colleague and for the sending of inappropriate messages to several more colleagues in the workplace.

The controversial sports reporter made the comment following a long and unexplained absence from his Newstalk ZB programme, The Devlin Radio Show. He’s been missing in action from the show since May 10.

It was reportedly during that particular shift that Devlin threw his shameful punch at a young sports journalist in the newsroom of NZME. The large open-plan office is shared by journalists from News Talk ZB and its sister newspaper company, the New Zealand Herald.

The young journalist, whose identity has not been made public in the interest of their future career prospects, apparently wanted to break a new news story via Devlin’s show. The situation turned sour when the young journalist refused to reveal to Devlin beforehand what the story was all about, reportedly blaming his secrecy and refusal on the controversial Devlin being something of a “blabbermouth”.

Devlin reportedly reacted angrily to this statement before first verbally abusing the young journalist and then climbing into the fight with his fists.

While Devlin had not responded to any requests for comments by several news publications, he responded with a lengthy statement of apology shortly after the incident became public.

Devlin explains in his statement that he’d lost his cool at a “radio colleague”. He said that his time away from the station had been appropriate given the investigation that followed, and that the agency was merely trying to determine what had happened in an effort to ensure the safety of its employees. He described his behaviour as “inappropriate”.

After one of Britain’s worst Olympic Games performances to date, the plot thickened further on Thursday after both Jo Coates and Sara Symington announced their exit from their roles at ….

United Nations human rights activists and experts are calling on sporting bodies from around the world to ban Afghanistan from participating in global events and competitions. The ban must be ….