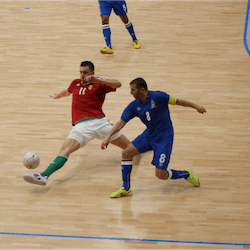 After spending the last couple of months altering its organisational structure and ramping up its original content, MTG, a pay-TV group, turned its focus to the sporting world, and acquired exclusive Nordic media rights for the UEFA Futsal EURO 2018.

This tournament is one of Europe’s largest contests for one of the fastest growing sports on the globe, comprised of football teams made up of five players. It kicks off on the 30th of January 2018, with 12 of the best futsal teams in Europe facing off against one another until the 10th of February in Ljubljana, Slovenia.

Spain Will Be Defending Their Crown

Spain, the reigning champs and seven-time winners, will be defending their crown against top contenders in the form of Russia, Portugal, and Italy.

Among the superstar player’s set to light up the Stozice Arena is Ricardinho, the Portuguese voted the finest futsal player at the Futsalplanet Awards for the last three years.

MTG Will Be Providing Live Coverage

All of the games from the UEFA Futsal EURO 2018 will be available live on the MTG Nordic video streaming service, Viaplay, and fans from Norway, Finland, Sweden, and Denmark will be able to watch the action as it is unfolding. Selected matches will also be shown on Denmark and Sweden’s TV3 Sport.

The Executive Vice President of MTG and Chief Executive Officer for MTG Sport, Peter Nørrelund, stated that everything about this football variation was explosive. He added that the speed was unbelievable, the skill was undeniable, and thus it was more than understandable how rapidly the interest in this sport was growing worldwide. He added that he felt sure that the UEFA Futsal Euro 2018 is going to be the most terrific tournament yet, and said that it was a wonderful opportunity for sports fans throughout the Nordic region to fully experience the highest level of futsal on a larger amount of screens than ever before.

The Knockout Stages that will get the party started have been divided into groups:

This will be the last Futsal Euro to take place within the current format of it being held every two years with 12 teams participating. The next tournament will be held four years from next year, and there will be 16 teams battling it out.