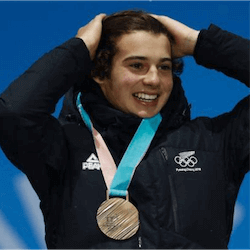 26 years after Annelise Coberger picked up a silver medal in France, New Zealand can celebrate with not 1, but 2 bronze medals at PyeongChang. It was the stuff of fairy tales as two Wanaka teenagers picked up 2 medals in the space of 2 hours.

At just 16 years of age, Zoi Sadowski-Synnott was one of the youngest competitors in the Big Air Snowboarding event. While the country had high hopes for the youngster, the finals were dominated by more experienced European competitors who looked cool as cucumbers compared to the nervous teenager.

Putting her nerves behind her, Sadowski-Synnott put down a solid score of 65.5 with a double wildcat in her first run. She then followed it up with a huge backside 900 in the second to score 92 and slide into medal contention. With a top score already in place, the teenager went big on her final run, attempting a frontside 1080, a trick she has never landed before. While the trick didn’t work out, her score of 92 landed her the Bronze.

Many celebrations ensured, however, there was not much time enjoy the moment as the men’s halfpipe freeski held more hope for a New Zealand medal. Carrying the hopes of the nation were brothers Beau-James and Byron Wells. Things looked bleak when Byron Wells injured himself in training but it was little known teenager, Nico Porteous who took New Zealand to new heights.

Nico’s brother, Miguel was rated as a more likely candidate for the finals than he was. Despite qualifying at the bottom end, Nico made it all the way to the finals along with Beau-James Wells. In his first run, Porteous posted a reasonable score, but nothing in line with a podium finish. His second run proved to be more than anyone could have ever imagined.

Going for a slightly bigger run, Nico executed his tricks with perfection to land an impressive score of 94.8. He went straight to the top of the leader board into first place. As the shell-shocked Porteous looked on, a duo of American snowboarding champs leapfrogged his score, pushing him down to third. There was much finger biting as the final contestant took to the snow, and a big competitor at that. However, Aaron Blunck posted a final score of 84.8, which meant that Nico had the Bronze.

This time it the celebrations were unstoppable as the New Zealand competitors and fans revelled in the delight of yet another medal after 26 long years.