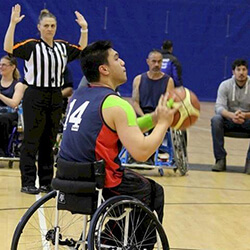 The New Zealand government plans on investing $7 million in an effort to get more of its disabled citizens interested in sport and recreation. The initiative will include the necessary training to develop a workforce that understands the requirements of young people and children that have a range of impairments. The statement was released by Sport and Recreation minister Grand Robertson, along with Disability Issues Minister Carmel Sepuloni.

The plan will also include advocacy for accessible playgrounds and parks, along with a more inclusive approach to communication, strategy, and policy with Sport NZ and its other affiliate organisations. A new Sport NZ role is set to be created to lead the new plan.

Robertson, talking to reporters, said that more needs to be done to improve the quality of physical activity that’s available to the disable, which is why the government will be spending the $7 million over the next four years through Sport NZ. He added that the funds would go a long way in establishing equity and ensuring that disabled people across the country can be just as active as non-disabled people.

Around 1.1 million people within the country identify as disabled, with more than half having more than one type of impairment. Sport NZ’s Active NZ data has revealed that young people with disabilities are less likely to take part in a range of activities and sport, particularly those that are related to using playgrounds and scootering.