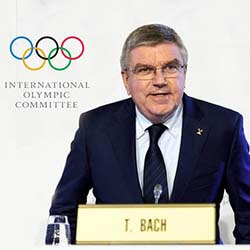 IOC President Thomas Bach is reportedly putting out fires by trying to calm down a worried Japan following increasing fears over the possibility that the Tokyo Olympic Games will not be in a position to go ahead as planned starting July.

New Zealand Olympic sporting officials have however claimed to have received no indication from the Olympic Committee that the Games will not be held in Tokyo this year. According to a leading London news and actuality giant, the Japanese government has already covertly concluded that the Games would have to be cancelled after Japan began witnessing hotspot outbreaks.

The focus is full-speed-ahead on preparing for the Games as if they are indeed going ahead as scheduled, a spokesperson for the New Zealand Olympic Committee has reportedly said. The spokesperson confirmed that not the IOC, the organisers of the games, or the Japanese Government has to date given any indication that the Games are going to be doing anything other than go ahead. In fact, according to the spokesperson, the exact opposite has been true, with both government as well as the IOC having earlier in the week “strongly” reaffirmed their commitment to the July/August Olympic Games schedule for Tokyo, Japan.

Tokyo recently declared a state of emergency due to a massive resurgence in positive cases, leading IOC member Dick Pound to say that the surging number of infections have become the “ongoing” elephant in the room that everybody is current dancing around and willing to go away on its own.