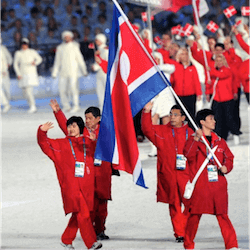 The 2018 Winter Olympic Games in PyeongChang, South Korea, which continue until February 25, are as always providing TV and streaming viewers, online sports betting fans and winter-sports lovers around the world with breath-taking displays of near-perfection on the ice and snow.

But in and around the Olympic Village, visitors aren’t gossiping about luge or figure skating. There are two topics dominating. Appropriately enough, given the yin-yang mandala on the South Korean flag, one is decidedly feminine and the other is very, very masculine.

The North Korean cheerleading squad: more than 180 women (outnumbering the North Korean athletes) identically dressed and performing perfectly synchronised cheers; moving in absolute unison even when removing their tracksuit tops, but otherwise immobile and unresponsive to the spectacle until called upon to perform another flawlessly synched robotic chant.

Some spectators find them beautiful; a brilliant example of the dedication and precision that is also required of the athletes. Waving the improvised blue flags of the united Korean Olympics team, they’re also being hailed as a symbol of hope in a peninsula senselessly divided for almost 70 years.

There are plenty of fans snapping pictures of their impressive displays and taking selfies with the cheerleaders. They aren’t being allowed too close, though; police guards and older male guardians at the end of each row ensure that they’re there to show off the “excellence” inspired in of the brutal dictatorship to the north, not engage with journalists or fans.

That’s the bit that the squad’s detractors can’t get over. No matter how perfect the cheerleaders’ displays are, these women are in effect slaves, doing exactly what they’re told to on pain of imprisonment, torture, and death.

And Then There Are the Penises

The North Korean cheerleaders might be problematic, but the yang on display for the games is flat-out risible. There has been huge interest in snapping the bizarre statues outside the Olympic media village, which not only represent anatomically correct naked men, but also have decidedly phallic, faceless heads.

Other tourists are discovering the Korean obsession with phallic art at Haeshindang Park, an hour’s drive from the Olympic site. The ‘penis park’ has schlongs of all shapes and sizes in a variety of bizarre poses – including a penis cannon manned by penis soldiers.

Gives a whole new meaning to “cannonballs” and “soldiers’ helmets”, doesn’t it?