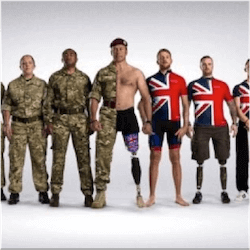 More than 70 service members of the Afghan National Army attended weightlifting and volleyball selection competitions for the upcoming Invictus Games. Afghan acting defence minister Tariqshah Bahrami as well as Resolute Support commander Gen. John Nicholson were on hand support the event. The Invictus games is an international multisport competition for wounded or injured service personal. The games will be held in Canada later this year.

Addressing the service members, Bahrami said that it was one of the country’s top priorities to pay attention to the soldiers with disabilities as well as the families of service members who have lost their lives defending the country. Nicholson added that the US was also committed to providing long term support for the people of Afghanistan. He went on to explain that together with the local security forces, the U.S is working to defeat terrorism and corruption.

At the event was an army soldier who was wounded 10 months ago in the Helmand province. He now wants to serve his country by entering into the Invictus Games. He explained that he and his fellow wounded soldiers couldn’t defend their country or perform any other duty. Another army soldier who lost both his legs in a clash with militants said he hopes to get a spot on the volleyball team for the games in Canada. He said that while the soldiers may be missing arms and legs, the rest of their bodies are healthy.

Meanwhile, Prince Harry, the Patron of the Invictus Games, will be traveling to Australia to learn about the preparations already underway. He will be meeting up with potential competitors as well as their families. The Prince will attend a launch ceremony Admiralty House where he will be joined by the Australian Invictus Games Squad in welcoming the games to Sydney in 2018. Local dignitaries will be on hand to start the 500 days to go countdown for Australian Games.

Harry will then spend time with the 2017 squad, learning about their preparations for the upcoming games in Toronto. Harry and the team will then head over to Circular Quay to watch a live demonstration of some of the Invictus Games sports. This includes wheelchair rugby, wheelchair basketball, indoor rowing and sitting volleyball. Thereafter, Harry will be on hand to watch the sailing race around the Sydney Harbour.