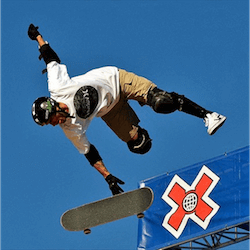 A New Home For The Summer X Games

The US Bank Stadium was recently completed and provides a dynamic facility to host the events for the Games. These include BMX, skateboarding motocross and more.

The X game’s most recent home was in Austin Texas as of 2014.

The games have announced the first set of athletes for the 2017 event and they naturally feature the best that the world of extreme sports has to offer.

Competing in this year’s BMX events is Kyle Baldock from Australia.

This rider competes in multiple BMX events and has made a name for himself being the first X Games competitor to take home two gold medals at one game.

In motocross the X Games will feature Jared Mees from Michigan and Jackson Strong from Australia. Jackson is a fan favourite thanks to his fearless approach to motocross. He took home a gold medal last year and he is itching to do the same this year.

Mees is a dirt track racer who brought home the gold last year for flat track racing. He is happily married to Nichole Mees who has now retired. For a time they were the first husband and wife team to compete against each other.

Skating is a major event for the Summer X Games and the list of confirmed athletes include 4 skaters. First up is Pamela Rosa from Brazil. She is a two-time gold medal winner in the street skating division.

She has been the youngest street skating champion in the history of the games and also the first street skater to win consecutive silver medals.

Pedro Barros, also from Brazil, is a serious threat in the skate park. He has never finished liver than silver in skate events. He took home his third gold medal at last year’s X Games.

Finally there are two Americans, Lizzie Aemantio and Alec Majerus. Alec holds a bronze in street skating while Lizzie has a silver and gold to her name.

This year’s line up looks set to offer some explosive extreme sports action for fans of highflying competition.