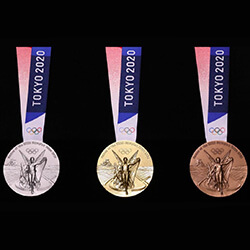 The medals for the 2020 Tokyo Olympic Games have been unveiled, and all the medals have been created completely from recycled consumer devices. The medals, which were designed to resemble polished stones, are the very first of their kind in the history of the Olympics, having been created from sustainably sourced materials.

Around 32kg of gold was extracted from 6.2 million used mobile phones that had been donated over the last two years by the Japanese public. They were also able to recover a total of 3.5 tonnes of silver and 2.2 tonnes of bronze to make 5000 medals for both the Olympics and the Paralympics. The medals at the 2016 Rio Games included an element of recycled material, but at a much lower level than those that have been produced for the event next year.

The front of the medal displays a more traditional design of the goddess of victory, but since Munich 1972, the host nation has been responsible for the design of the reverse of the medal. According to officials, the design is intended to symbolise diversity, and to represent a world where the people who compete in the events and work hard are fully honoured. Four different robots will also in operation at the venues, which will include mascots Miraitowa and Someity, and the robots will be able to greet visitors, shake hands, and wave.

Other models will move around the venues, and will capture videos and audio to transmit internationally.