All About The Upcoming 2017 Summer X Games 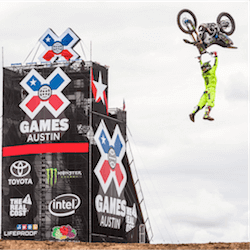 For many punters and sports enthusiasts, any major sporting competition is a chance to review the latest sporting technology and get in on some serious betting action. In this respect, the 2017 Summer X Games is the perfect sporting event, providing non-stop action and plenty of betting opportunities. First held in Rhode Island in some 20 years ago, the X Games is an annual extreme sports event hosted by ESPN, featuring over 200 of the best extreme athletes from around the world.

The X Games often features big names in the sports industry as well as new tricks such as Travis Pastrana’s exciting double backflip in freestyle motocross or Tony Hawk’s astounding 900 in skateboarding. The X Games also includes an environmental event as well as a music concert held over a period of three days. As with the Olympics, the X Games is split into the summer and Winter Games. The Winter games are held in January/February while the summer games are held in July/August.

The Winter X Games features events such as skiing, snowboarding and snowmobiling; while the Summer games features skateboarding, moto X and BMX events. The 2017 Summer X Games will take place from the 13th to the 16th of July in Minneapolis Minnesota. This will be the first time the X Games is held in the Midwest with the 2018 Games also scheduled to be held in Minnesota. This year, over 200 of the world’s best extreme athletes will be in attendance hoping to claim the bronze, silver or gold medal.

There are three main sporting events at the Summer X Games; names BMX, skateboarding and Moto X. Within each sport, there are multiple disciplines including:

For local punters, betting on the X Games can be fun and rewarding. Before placing any large bet though, it is important to gather as much information as possible about the competitors and the type of discipline they are the most proficient. It is often easier to track individual competitors in a single discipline over the last 12 months to gauge their performance at the X Games.