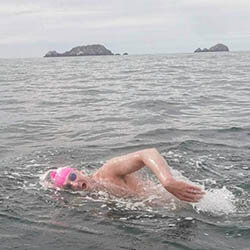 The rituals performed by the Indigenous Maori before crossing the treacherous waters of New Zealand’s Cook Straight have been well documented. Separating the North and South islands of New Zealand, Cook Strait connects the Tasman Sea with the South Pacific Ocean while running alongside the capital city, Wellington. Its waters are considered some of the most dangerous in the world.

But Cook Straight is also one of the ultimate challenges for marathon swimmers like 54-year-old Titahi Bay Surf Club swimmer Brett Richardson, who on Tuesday (New Zealand time) became only the 131st person to conquer the hypothermia-inducing conditions of the mighty mass of water.

Proudly sporting the green speedos of the Titahi Bay Surf Club, a shivering and severely hypothermic Richardson was eventually dragged out of the water after 10 hours and 20 minutes of making his way across the strait in below-zero temperatures created by a “nasty” Wellington southerly the previous week.

Richardson began his journey by setting off from Wellington’s Ohau Point at 9:46 a.m. on Tuesday morning. He emerged loads of luck and weather playing in his favour later on the other side of his biggest challenge conquered to date.

Crossing the famous straight has been a dream of his ever since he was a boy back in 1978. He recalls how the dream first settled in him upon hearing how a schoolgirl named Meda McKenzie, only 15 years old at the time, had during that year achieved the nearly impossible feat. He says that as a boy, he could not even imagine how that could be possible.

But it was. And now he knows how.