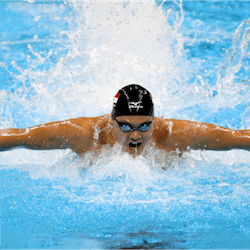 The FINA World Swimming Masters kicks off in August this year in Budapest. Singaporean swim star, Joseph Schooling will be gunning for gold this year.

He may be only 21 years old but already he has won 19 gold medals, including not just the first ever swimming gold medal for Singapore, but the first gold medal in any sport for the country.

Now the young talent, who is currently studying in America, believes that he can challenge the world record of Michael Phelps set at the FINA World Swimming Masters.

Phelps was a childhood idol for Schooling who remembers seeing him swim his 100m in a record time of 49.82s.

Schooling has so far spent a dedicated few months in training and practice. He is also juggling his studies at the University of Texas where he is a member of the Texas Longhorns swimming team.

At just 21 years of age and with an already much lauded career, breaking the 100m record definitely seems within Schooling’s power.

Other events he will also be tackling include the 50m Butterfly, the 200m Butterfly and two relays.

The Challengers For The Crown

Competition for Schooling at the FINA Masters includes Chad le Clos from South Africa and Masato Sakai from Japan.

These two challengers will be looking to capitalise on Schooling’s poor form at the 2017 NCAA Championships where he failed to qualify for the 200m Butterfly.

Sakai took home a silver medal at the 2016 Games, just behind Phelps so his inclusion in the FINA Masters should not be taken lightly.

A Stellar And Fresh Venue

This year’s FINA masters will be taking place at the Danube Arena in Budapest. This will be the first time the venue has hosted the World Swimming Masters.

One of the main highlights of the “Palace of Pools” is the fact that it is a green building, meaning it is run as an environmentally sustainable arena that uses clean and renewable energy to power itself.

Swimming, Diving, Water polo, Open water swimming and Synchronized swimming will be the 5 disciplines featured at the FINA World Swimming Masters this year.

This meeting will be a good practice run for the city that hopes to host the 2024 Summer Games.