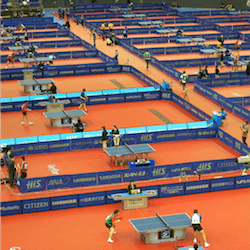 Table tennis might not be one of the more popular competitive sports in New Zealand but it certainly does have a large fan base. What most people think is social sport is actually one of the most demanding individual competitive sports on the planet. The skill, balance, speed and agility needed for each game means that athletes need to stay in peak physical condition if they want to rise to the top.

In the woman’s competition, Japan was a force to be reckoned winning the team championships a total of 8 times. In the 1960’s China started to emerge as a dominant power. Aside from a brief period between 1989 and 2000 China have completely dominated the sport with a massive 18 team championship titles in the men’s division. It was only in the 1970’s that the woman’s Chinese team started to tighten their grip on the sport. Since 1975, the Chinese woman’s team has only lost twice.

China a Force to be Reckoned With

The most recent championships were held in Suzhou China from the 26th of April to the 3rd of May 2015. It was no surprise that China topped the medal tables again winning a total of 4.5 gold medals in the five events. The men’s singles event was won by China’s Ma Long while the Woman’s singles was won by Ding Ning. Such was the dominance of the Chinese that both the men’s and woman’s singles featured a Chinese athlete holding the gold, silver and bronze medals.

The 2017 table tennis world championships are scheduled to take place on the 29th of May and run until the 5th of June 2017. The event will be held in Düsseldorf, Germany and attract the best players from around the world. The tournament will provide punters and sports fans with plenty of action and betting opportunities.