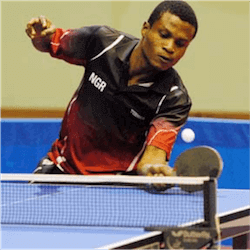 Ojo Onaolapo is a name well known in the world of professional table tennis. In 2010, the young Nigerian exceeded all expectations as he powered his way to the quarterfinals of the 2010 Youth Olympic Games. In 2014, Ojo’s skill and dedication to the sport was pivotal to the Nigerian team in picking up the bronze team medal. After defeating Harmeet Desai and Amalraj Anthony, with partner Segun Toriola, Ojo won the crucial third place decider against India with a memorable 3-1 victory.

The Nigerian superstar, who currently plays for ADC Ponta Do Pargo in the Portuguese League, now feels he can build on his Singapore and Glasgow success at the upcoming 2017 Table Tennis World Championships in Düsseldorf. Speaking to the press, Onaolapo said that he is relishing the opportunity to prove himself in such a big arena. His aim is to re-enact his commonwealth feat by giving 100% commitment to his team. Ojo says he wants to win back all his fans by bettering his 2014 success at the Commonwealth Games

Ojo wants to be able to justify his place in the Nigerian team. According to him, the Nigerian team is considered one of the best in the world. Players are selected for the team based on their current performance and their merit. This means that any previous performances will not be looked at which makes it very difficult for any player to make the team.

Focus and Determination is the Key

For Ojo Onaolapo, his aim in Düsseldorf is to qualify from the group before he can think of anything else. Ojo has said that Quadri Aruna has shown the team how to beat the best. He made it possible to believe in themselves as long as they work hard and stay focused. Ojo says that the biggest lessons he has learned from Aruna is humility and dedication to the sport.

Ojo played one season in Italy as a stepping-stone for him to enter the bigger leagues in Europe. After joining the Portuguese league, Ojo admits that while the structure in Italy is good, the quality of the players in Portugal is just spectacular. The competitive experience and challenge he faces in the League will certainly help his career. The 2017 World Table Tennis Championships kicks off on the 29th of May in Düsseldorf.