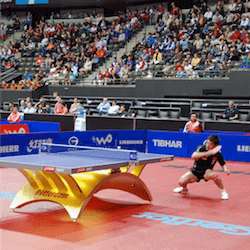 Online sports betting sites not only give New Zealand punters access to the most popular sports all over the globe, like football and horseracing; they also allow fans of the most niche sports to wager on the top tournaments.

Table tennis, for example, is pretty much a minority sport everywhere, except perhaps in East Asia. Nevertheless, it is very popular in Europe and especially in China, two regions with enormous populations, which in turn stimulates interest in the indoor sport worldwide.

Betting fans only get to see a World Championship every two years, however, so Kiwi punters will be looking forward to the ITTF’S Liebherr 2017 World Table Tennis Championships, running from 28 May to 5 June in Dusseldorf, Germany.

Modern table tennis tables have come a long way from the rickety chipboard surfaces on wobbly trestles that were a traditional feature of home basement games in the 50s and 60s. Design and innovation are as important to table tennis as they are to any other sport with a huge global TV audience.

The World Championships at the Messe Dusseldorf trade centre will continue that tradition, introducing black-topped tables, in keeping with the ultra-modern décor of the exhibition hall, for the first time in the tournament’s history. Sturdy, flat and perfectly level, the tabletops will rest on solid curved bases in the colours of the German national flag.

Design sensibilities aside, the actual players in the tournament will be of more interest to New Zealand betting enthusiasts. It is too early to know the field yet, but the ITTF is expecting entries from around 150 countries, including 45 from Europe and 37 from Asia.

One thing that is certain is that China and Chinese territories are likely to dominate in both the men’s and women’s singles. On current ITTF World rankings, the top four men are from China, including world No. 1 Long Ma, as are the top two women: Ning Ding at No. 1, followed by Yuling Zhu.