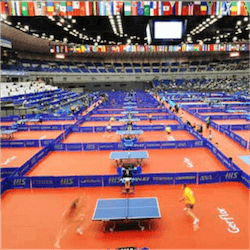 New Zealand’s table tennis punters have to wait two years between each tournament, so we can expect some intense betting enthusiasm when the 2017 Liebherr World Table Tennis Championships start in Dusseldorf, Germany on 29 May. For the first time, the tournament will be using black-topped tables, which should enhance the televised coverage.

Play in the main draw starts on 30 May, with the Men’s and Women’s Doubles Round 1, and the first and second rounds of the Mixed Doubles. The Men’s and Women’s Singles start on 31 May, and 3, 4 and 5 June are devoted to the semi-finals and finals in all categories.

The International Table Tennis Federation (ITTF) announced the final list of players for the Dusseldorf tournament in April. There are 613 athletes listed, from an impressive 108 countries.

No New Zealand women qualified for the 2017 tournament, and Matthew Hetherington is the only New Zealand player in the men’s competition. The 26-year-old left-hander is unlikely to prove a serious challenge to the top seeds, however, although fans will be eager to see if he can at least make it through final qualifiers on 29 May into the main draw.

Chinese players are likely to be the favourites in both the Men’s and Women’s Singles. Despite challenges from current World Number 5, Germany’s Dimitrij Ovtcharov, and players from several other Asian nations, China remains dominant in men’s table tennis, with Long Ma, Zhen-Dong Fan, Xin Xu, and Jike Zhang filling the top four spots on the ITTF ranking ladder.

China’s Ning Ding is top of the women’s ladder, followed by countrywoman Yu-Ling Zhu in second place, and Meng Chen at No. 5. Ma and Ding are the reigning Women’s and Men’s Singles World Champions, following their 2015 victories in Suzhou, China.

All seven of these stars are included in the squad of six men and six women that China is sending to Dusseldorf, so they are liable to attract the lion’s share of the betting.