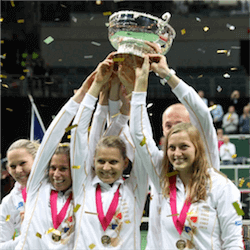 This year’s Fed Cup will see the 55th year of the women’s Tennis tournament. This annual professional tennis tournament is the largest annual women’s tournament attracting top athletes from across the world of women’s tennis.

2017 looks set to be a momentous year with star players who arose from the 2016 Cup are sure to shake things up.

France’s Caroline Garcia along with her teammates Kristina Mladenovic and Amelia Mauresmo really shook up the competition as well and almost made it to the finals if it was not for the powerhouse performance of Czech Republic’s Karolina Pliskova and Barbora Strycova in the doubles.

Kateryna Bondarenko from the Ukraine and Kiki Bertens from the Netherlands are two other players to watch during this 55th annual Fed Cup tournament.

The Fed Cup features 16 participating countries that play off against each other until a champion is declared. The 16 countries are made up of the best of the 99 member countries.

Despite being the very first tournament offering no prize money and expecting players to cover their own expenses, the Fed Cup quickly grew to a huge annual event once sponsorship was picked up by the event organisers.

Players from Each Zone

The sixteen teams that compete in the Davis Cup are formed from the best teams who make it through from their respective zones.

The Zones are the American Zones, the Euro and Africa Zones and the Asia and Oceania Zones. Each of the zone winners move into the Group 1 and Group 2 world group stage. In each if the groups 4 of the 8 players will be seeded to enter the next round in the quarterfinals. The winners of these quarterfinals move into semi finals and then finals rounds.