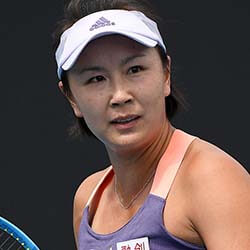 Uncertainty continues to prevail over whether or not Chinese tennis star Peng Shuai is actually safe and able to speak freely.

According to a journalist who conducted a recent first sit-down interview with the star, the conversation with Shuai left a strong impression that her opinions were being closely monitored, and even controlled.

The presence of a Chinese Olympic official and translator reportedly left L’Equipe journalist Marc Ventouillac with the distinct sensation that Peng is still not able to speak openly about the allegations of sexual abuse made against a former top-ranked Communist Party leader.

Shuai last November took to social media platform Weibo to reveal how former political official Zhang Gaoli had forced her into having sex during their relationship. Her social media post was deleted shortly after.

During the interview with Ventouillac, however, Shuai once again reiterated that the real meaning of her post had been lost in translation, and that she had not accused Gaoli of any wrongdoing. Shuai also said that the controversial post had led to a major misunderstanding.

According to the journalist, the real message behind the interview was that of Chinese officials hoping to put the issue to bed. He said he suspected everything discussed during the interview to have been nothing more than propaganda on the part of the Chinese Olympic Committee.

Ventouillac also said that while Shuai answered every question posed to her, he has no way of knowing whether she was able to answer freely. The questions asked during the interview were submitted to the star well ahead of time.