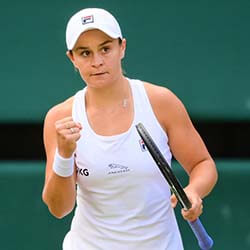 The latest news in the world of tennis is that Australia’s Ash Barty will commence her 2022 season at January’s Adelaide International Australian Open warm-up ahead of the Australian Open.

Barty, who won the warm-up in its inaugural 2020 edition, hasn’t played professional tennis since September’s US Open at Flushing Meadows. The WTA Player of the Year will be joined by defending champ Iga Swiatek – as well as Karolina Pliskova and Garbine Muguruza.

About to headline the “Melbourne Summer Set” at Melbourne Park are AO champion Naomi Osaka and British youngster Emma Raducanu.

The two Melbourne events will prove invaluable for the British teen as she seeks to acclimatise to conditions in Australia ahead of the first Grand Slam tournament of 2022.

As for Osaka, who now ranks as the world No. 13th, her return will also mark her first since her early exit from Flushing Meadows. For Osaka, 2021 had been a demanding year that saw her withdraw also from the French Open and Wimbledon as a result of mental health issues and challenges involving the press.

In men’s tennis, Melbourne’s ATP 250 tournament beginning January 4 will be headlined by none other than a returning Rafael Nadal. And while world No. 1 Novak Djokovic has been listed as part of Serbia’s draw for the ATP Cup, his participation in the Australian Open remains uncertain due to vaccine mandates.

GOAT Roger Federer has in the meantime confirmed that he will not be playing in Australia due to his ongoing recovery from knee surgeries.