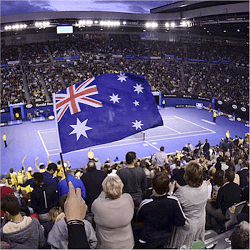 Roger Federer has a practice session in Perth for the Hopman Cup, and 6,000 fans turn up to watch. Rafael Nadal’s jet-lagged yawns in the first round of the Brisbane International make sports headlines around the world.

There’s no doubt about it: tennis fans in New Zealand and Australia are starting 2017 off with a feast of word-class talent and plenty of betting opportunities. And this is just the warm-up: on January 16, the top stars converge on Melbourne for the Australian Open.

Here’s what some of the top male seeds scheduled to compete at Melbourne Park are up to at the moment:

Roger Federer, competing for the first time since Wimbledon 2016, has not disappointed his fans. The 35-year-old Swiss legend beat Alexander Zverev 6-3 6-4 to secure a Switzerland-Germany tie in their Hopman Cup Clash on Tuesday. The knee injury that ended his 2016 season has seen NinjaFed slip to Number 16 in the Open seeding, but that is no indication of just how dangerous he can be.

Rafael Nadal is also seeded lower than we are used to, at Number 9. Wrist and knee injuries over the past year took him down to Number 9 in world rankings too, and arriving only 48 hours before the Brisbane Open obviously left him discombobulated, although he did win his jet-lagged opening match against Ukrainian Alexandr Dolgopolov 6-3 6-3. He deliberately scheduled this warm-up tournament to ensure he’s fully acclimatised by January 16, so he can’t be ruled out in his quest to repeat his 2009 triumph and win a second Australian Open.

The big draw in the men’s tournament, of course, is the possibility of another Djokovic-Murray final. They’ve met in four Australian Open finals, and Novak Djokovic has taken every one. Sir Andy was also runner-up to Federer in 2010, so the Scot must be hoping he can make it sixth time lucky. He’s currently contesting the Qatar Open, and beat Frenchman Jeremy Chardy 6-0 7-6 after a tie-break in the first round.

Djokovic, seeded second in the Open after world Number One Murray, is also busy in Qatar, after a hard-fought come-back win in his first match against German Jan-Lennard Struff. So it’s possible the Serb and the Scot may see another showdown before the Open even starts.