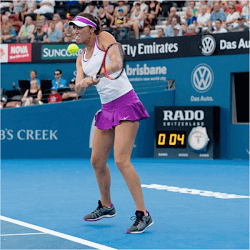 Some of the world’s top tennis players will be enjoying a very quiet New Year’s Eve in Australia on Saturday, because the 2017 season hits the ground running on January 01, with the start of the Brisbane International. The eight-day tournament, featured on both the ATP World Tour and the WTA Premiership, generates lots of interest among fans of men’s and women’s tennis, and gets everyone warmed up for the Australian Open later in the month.

The Brisbane International is hosted on the outdoor Plexicushion hard courts of the Queensland Tennis Centre, and the 2017 tournament promises some excellent betting action for New Zealand tennis enthusiasts. Reigning Men’s Singles Champion, Canadian Milos Raonic, is back to defend his title; as is the Women’s Singles Champion, Germany’s Angelique Kerber.

But it is the news that Rafael Nadal will be competing, prospectively seeded fifth, that has many punters excited. The Spaniard has been emphatic in recent press statements that 2017 will see him return to world-class form, after being hampered by injuries since 2014, so fans are expecting some thrilling tennis from him.

Switzerland’s Stan Wawrinka, like Nadal playing in his first Brisbane International, is the 2016 US Open Champion, so his progress will also be of great interest to punters. We may also see some fireworks from Bulgarian Grigor Dimitrov, Japan’s Kei Nishikori, and Spaniard David Ferrer.

Kerber faces some stiff competition for the Women’s Singles title, but the current World Number One has just finished a year that saw her take an Olympic silver medal, as well as powering to victories at the Australian Open and US Open. Russian player Svetlana Kuznetsova also has two Grand Slam titles under her belt, and will no doubt be psyched to make an impact in her first Brisbane International.

Fast, aggressive Slovak Dominika Cibulkova, the 2016 WTA Tour Championship winner, is also sure to entertain fans and punters alike. Some betting fans reckon you need youth to cope with the Brisbane heat, however: in which case their money will be on the 23-year-old 2016 French Open winner, Spain’s Garbine Muguruza, or 24-year-old Czech Karolina Pliskova, who lost to Kerber in the 2016 US Open Final in three hard-fought sets. Muguruza and Pliskova are currently ranked seventh and sixth in the world, respectively.