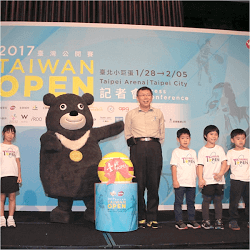 The success of the inaugural WTA Taiwan Open in February 2016, held at the Yang-Ming Tennis Centre in Kaohsiung, convinced the Women’s Tennis Association to move the tournament to Taipei in 2017. So from January 30 to February 05, the hard courts of 10,000-seat Taipei Arena will host some of the top players in women’s tennis. Many see the Taiwan Open as a handy staging post between the Australian Open and upcoming Fed Cup, Doha and Dubai tournaments, while remaining in the Asia-Pacific time zone.

In the doubles tournament, local sisters team Hao-Ching and Yung-Jan Chan, currently ranked 12th in the world, will be returning to defend their 2016 title. According to the bookies, they are also favourites to take their second doubles title in a row.

Singles Title is up for Grabs

History may repeat in the doubles competition, but there is no way we will see a replay of the 2016 Taiwan Open singles final, which saw Venus Williams triumph over Misaki Doi 6-4; 6-2. Williams is not on the 23-player roster announced by the WTA in December 2016 for the singles main draw, so fans hoping to see the American superstar in action in 2017 had better focus on the ASB Classic from January 02; she and her sister, Serena, will be competing in Auckland.

However, 21 of the 23 players on Taiwan Open singles roster are ranked in the WTA Top 100, so fans are assured of world-class tennis as these athletes vie for the 2017 Taiwan Open singles crown. Ukrainian 22-year-old Elina Svitolina, currently ranked at 14, is probably the major competition for last year’s runner-up Doi. The Japanese player is currently enjoying her highest world ranking ever, at 30, so she no doubt has high hopes of bettering her 2016 performance.

Former world Number One Jelena Jankovic can never be dismissed, either, and the Serbian great is joined by Germany’s Sabine Lisicki, twice runner-up at Wimbledon, and Italian Francesca Schiavone, 2010 French Open winner and 2011 runner-up. All three are capable of creating upsets on the day, so neither Svitolina or Doi can expect an easy run at the title.