Andy Murray Will Only Participate If He Is Ready 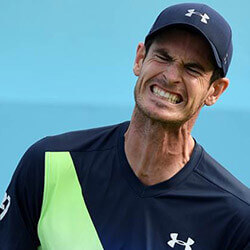 Andy Murray, who has won at Wimbledon twice in his career, has told reporters that he will only play in this year’s event if he feels ‘ready.’ The Briton player, who is back after an absence due to hip surgery, impressed the audience with his surprising win against Stan Wawrinka at Eastbourne, his second match since he came back from his leave.

Murray won Wimbledon in 2013 and 2016, and is currently set to start at the All England Club ahead of this year’s Wimbledon. But whether he will be attempting another win at the international tournament is yet to be seen, as the player wishes to wait and see how he feels before deciding to take part.

Since he absence, Murray’s world rank has dropped to 156th, is still eligible to take part in Wimbledon as he was within the top 100 players before his surgery. The draw for the event will be taking place at the All England Club, but Murray has said that he doesn’t know if he will be ready to make his decision before the draw.

Murray’s last game saw him easily beat Wawrinka, who is a three-time Grand Slam winner. Murray beat him in straight sets at the Nature Valley International in Eastbourne. It was Murray’s second match since his return from an 11-month absence, after having surgery completed on his right hip.  His absence took place after last year’s Wimbledon, meaning that it’s been almost a year since Murray saw international-league play.