Angelique Kerber Crashes Out of Wimbledon 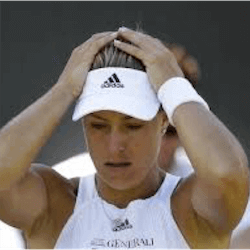 Kerber Out of Wimbledon

Woman’s top seed Angelique Kerber has failed to make it to the quarterfinals of Wimbledon. The 2016 runner up lost to Garbiñe Muguruza in one of the most exciting matches of the tournament so far. Relegated to No2 court for second time in succession, Kerber and her Spanish opponent put on a spectacular show which featured two very tight sets while the third had an incredible five breaks of serve.

The first set was evenly matched with neither player getting a hold of the game in any decisive way. Kerber got the break she was looking for when they pair were at four games all. Muguruza played two unforced errors followed up by a drifting backhand which pulled the ball wide of the service line. Having broken Muguruza’s serve, Kerber was able to serve out the first set.

The second set followed a similar path to the first with both players desperately trying to find a way to exploit the other’s weaknesses. Having served first, Muguruza played out the set to 5-4 and forced Kerber to make a few mistakes. With the game at deuce, Muguruza pounced on a week serve with a powerful backhand. Kerber just managed to flick the ball back but Muguruza drove the ball home for the set point.

A Nail-Biter from Start to Finish

With a packed stadium and most of the crowd behind her, Kerber never lost her resolve. She started the third set breaking Muguruza’s serve and put her nose ahead. Muguruza struck back straight away levelling the score at 2-2. Not to be outdone, Kerber broke Muguruza again winning five straight points on the bounce. Muguruza in turn broke Kerber’s serve after a five-deuce game. Once again, the set had reached the decisive 5-4 mark. In a repeat of the second set, Muguruza broke when it mattered the most, claiming match point on her third attempt.

Not only has Kerber been played out of the tournament, she also loses her No1 ranking. Speaking to the press, Kerber said she was happy with her performance. She said she thought they both played a good match and it all came down to two points. She admitted that she was disappointed she lost but it was the best match she had played in a long time. Meanwhile second seed Simona Halep survived a tight match against Victoria Azarenka to go through to the quarterfinals. Venus Williams, Jelena Ostapenko and Coco Vandeweghe who were also victorious on the day, will join her.