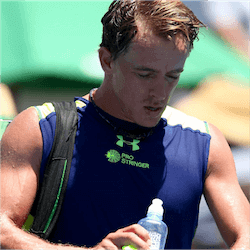 Tennis fans now have all eyes on the ATP players, as the quarterfinals of the men’s competition start on Thursday. New Zealand betting fans would have been gutted to see local hopeful Rubin Statham go down after a strong start to Czech Republic’s Jiri Vesely, the 2015 ASB singles champion. Statham only made the singles draw on a stroke of good luck to begin with.

After Statham just missed qualifying on the weekend, the withdrawal of defending 2016 champion Roberto Bautista-Agut because of a stomach bug gave him a second bite at the cherry. He arrived at Auckland’s ASB Tennis Centre on Wednesday morning expecting to play a doubles match, to be informed that he also had a crucial singles match that afternoon. After taking the first set 7-6, however, the New Zealander didn’t have the stamina to finish Vesely off, and the Czech came back to win the final two sets and the match.

The men’s singles quarter-finals kick off the day’s play at Centre Court on Thursday, with the Netherlands’ Robin Haase, who knocked out Spain’s third-seeded David Ferrer, playing another Spaniard: Joao Sousa. The first men’s doubles quarterfinal follows shortly afterwards on the Grandstand Court. For the rest of the day, the two courts will host both singles and doubles quarter-finals, with staggered starts so that punters can follow the progress of both with minimum overlap.

The second singles match is a USA derby: John Isner versus Steve Johnson. Marcos Baghdatis, the Cypriot who has been such a crowd-pleaser while dispatching Frenchman Adrian Mannarino and Jamaican-German wildcard Dustin Brown, plays Vesely in the third singles quarter-final, followed by France’s Jeremy Chardy versus American Jack Sock.