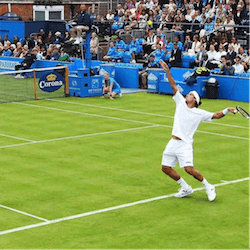 This month tennis fans get the second set of ATP 250 tournaments. First off is the Ecuador open starting this weekend. 16 players will be battling it out in the qualifying round for 4 open spots to the main draw.

The event will feature a special guest player, Camilo Ponce from Ecuador with another wild card draw to be revealed later.

Tennis fans at the Sofia Open are very excited with the imminent start of the Open taking place in Arena Armeec. Three of the best Bulgarian tennis players will be taking part at this year’s Open, doing their country proud. The second round draw will take place on Saturday.

The current competitors are world no1 Dominique Thiem, David Goffin, the number 2 ranked player, Grigor Dimitrov currently ranked number 3 in the world. They will also be joined by the defending champion Robert Bautista.

Meanwhile preparations for the event are well underway with the special court flooring having been completed in Arena Armeec to make the venue truly a world class tennis court. Preparations have also been completed for the athlete’s hotel stays and gym requirements.

Finally the third and final ATP event to kick off in February is the ATP Sud De France in Montpellier. This year’s top seed at the Sud De France is world no7 Martin Cilic. Despite a surprisingly quick exit from Melbourne, he is still the highest seeded player.

With two titles last year, Cilic is the firm favourite for the Sud De France. The competition is still very stiff however.

Mischa Zverev is currently in fantastic form after his Grand Slam performance being possibly the best of his career so far. This year’s defending champion , Richard Gasquet has confirmed his attendance at Sud De France, he will be joined by Jo-Wilfred Tsonga a world no 14 player and fan favourite.