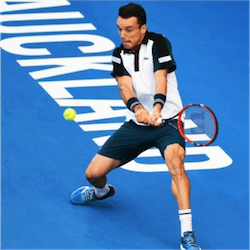 Auckland’s ASB Tennis Arena is famed as the home of the ASB Classic, held every year in January. This year, New Zealand tennis fans can enjoy the pinnacle of men’s national team tennis at the stadium too: the ASB Arena has been chosen as the venue for New Zealand’s next Davis Cup tie on April 7-9.

New Zealand will meet South Korea in the Asia/Oceania Zone Group 1 first-round play-off. The last time the two teams met, in heavy snow in Seoul last year, South Korea triumphed 3-1, so the NZ team will be out for revenge.

It is also vital that they win the five-match play-off, if they are to stay in Group 1, and thus be in contention for promotion to the 2019 World Group when they compete in next year’s Davis Cup. They had a chance at promotion this year, but that disappeared in the Group 1 first round.

New Zealand met India in Pune for the first round on February 17-19. In all four singles matches, Yuki Bhambri and Ramkumar Ramanathan were too much for New Zealand’s Finn Tearney and Jose Statham.

India won the tie 4-1, with New Zealand doubles partners Artem Sitak and Michael Venus securing the team’s only win, against Leander Paes and Vishnu Vardan. India will now face Uzbekistan in the second round in April, in the hope of progressing to the World Group Play-Offs, and possible promotion, in September.

World Group Round 2 will Interest Punters

The 16 teams in the Davis Cup 2017 World Group played their first-round matches in eight locations around the world from February 03-05. The eight victors now meet in the World Group quarter-finals in April.

Belgium will host Italy, Serbia will host Spain, France will be at home to Great Britain, and Australia will host the USA. Apart from the tennis betting action to come, fans can already take a punt on which Australian city will get to host the tie.

Melbourne and Sydney are both persuasive options, but as they already host so much top tennis, Tennis Australia may opt to hold the Davis Cup tie in another city that could use the revenue and publicity boost. Brisbane, Canberra and Adelaide are all in the running.