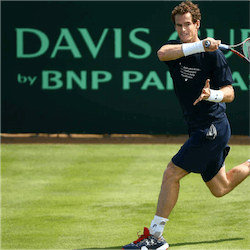 Lleyton Hewitt, the veteran captain of Australia’s national tennis side, came under fire from commentators and fans after the Aussies were bundled out of the Davis Cup 2017 on Sunday in their semi-final against Belgium. Needing just one win from two reverse singles matches to progress to the final, Hewitt chose to replace original selection John Millman in the final rubber of the closely fought tie with Jordan Thompson.

This was despite the fact that Thompson’s Belgian opponent, Steve Darcis, had already beaten him before on the ATP Tour, while Millman had already delivered a much-better-than-expected performance against World No. 12 David Goffin on the first day of the Davis Cup semis.

And since Goffin had already beaten Nick Kyrgios, despite the Aussie winning the opening set, in the first of Sunday’s reverse singles, it’s hard to see why Hewitt went with arguably the weaker player for the crucial final match. In any event, Darcis put Thompson away in straight sets: 6-4, 7-5, 6-2, sending Belgium through to the finals in November.

It’s a bitter blow for tennis enthusiasts. Had Hewitt’s team won in Belgium, not only would Australia be going to their first Davis Cup final in 14 years, but they would also be hosting it. Instead, come November, sports betting fans will be following the action in France.

France Beats Serbia in Other Semi

Belgium’s opponents in the final will be hosts France, who played their semi at home against Serbia this weekend. The scores were tied after the opening singles matches, in which Serbia’s Dusan Lajovic beat Lucas Pouille, and France’s Jo-Wilfried Tsonga beat Laslo Dere.

Pierre-Hugues Herbert and Nicolas Mahut gave France the lead with Saturday’s doubles victory over Filip Krajinovic and Nenad Zimonjic, and Tsonga finished off the Serbians with a four-set win over Lajovic in the reverse singles. As a result, Sunday’s second scheduled match, Pouille vs Dere, was not played.