Australian Open About to Begin 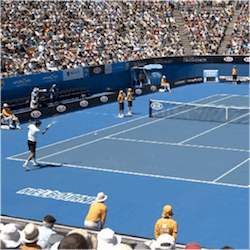 Anticipation Builds for the Australian Open

The Australian Open is the first Grand Slam tournament on the tennis calendar and this year it kicks off on Monday the 16th of January, and runs until the 29th.

Occurring annually, midway through January the Australian Open serves up an array of possibilities for big hitting wagering options.  With a diverse mixture of events and categories that run throughout the tournament, the Australian Open acts as a trailblazer for other tennis championships to follow. Played on hard courts since 1988, the Open has the biggest fan attendance behind the US Open.

The Australian Open attracts the world’s greatest tennis players, seeking to claim victory in order to boost moral and confidence for the upcoming championships.

Looking at players like Andy Murray, Novak Djokovic, Rafael Nadal and Rodger Federer the Australian Open men’s division is a wide-open ball game. Nadal is still the king of clay; but fitness concerns may be something to consider as he’s faced a number of challenges recently.

The inspiring Juan Martin del Porto, fighting his way back from bottom of the ranks to top 50 in the space of a year was also a fierce contender. However the Argentinean now has to sit out of the 2017 instalment of the Australian Open due to insufficient recovery of his wrist. Many were hoping that he’d make a valiant return and emerge as a true underdog, but this seems not to be the case- for this year anyway.

In the women’s division players such as Caroline Wozniacki, Angelique Kerber and the Williams sisters make for nail biting set action and are the outright favourites to take to the podium in the competition.

Serena Williams is always a top contender to claim victory in Melbourne. Having being defeated in the 2016 finals by Kerber, Williams has been prepping for the 2017 Australian Open in Florida and as always, looks strong.

Johanna Konta looks set for great odds at the 2017 Australian Open. With a cracker of a year in 2016, Johanna claimed her first career title on the WTA tour and managed to reach the semi-finals in 2016. She finished the year on an impressive 10th world ranking.  Given that certain heavy hitters like Maria Sharapova and Azarenka are out of the competition, Konta could be a big upset.

Novak Djokovic will be looking to retain his title as champion at the 2017 Australian Open. With his fierce fighting spirit and true focus Djokovic can never be counted out.

The shocking surprise victory of Angelique Kerber over Serena Williams in 2016 saw Melbourne erupt. Kerber is still at the top of her game, but Serena will be looking to settle a debt.

The 2017 instalment of the Australian Open promises a record purse amount up by 14 % over the 2016 prize pool.  Standing at a staggering 50 million Australian dollars, single division winners are set to take home 3.7 million dollars each.