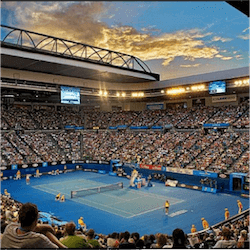 Murray, Kerber to Australian Open Round 2

New Zealand betting enthusiasts following the Australian Open saw both the men’s and women’s top seeds, Brit Andy Murray and Germany’s Angelique Kerber, progress to the second round. The men’s World Number 1 put down unseeded Ukrainian Illya Marchenko 7-5, 7-6, 6-2, in a game that lasted two hours and 47 minutes. Marchenko started strong, breaking Murray’s serve three times out of eight in the earlier stages, but he seemed to run out of steam after the Scot took the second-set tie-break 7-5.

Kerber, likewise the women’s World Number 1, is defending the title she won at Melbourne Park last year. Her first-round match against Ukraine’s Lesia Tsurenko also featured a titanic second-set struggle, but apart from that, the German had little trouble in winning the game 6-2, 5-7, 6-2.

Punters with a bet on women’s fourth seed Simona Halep had an unhappy day. The Romanian crashed out 3-6, 1-6 to World Number 57 Shelby Rogers of the USA. Italian Roberta Vinci, the women’s 15th seed, also hit a shock 1-6, 6-7 defeat at the hands of another American, Coco Vandeweghe. The other women’s seeds fared better: Spain’s Garbine Muguruza at 7, Russia’s Svetlana Kuznetsova at 8, the USA’s Venus Williams at 13, along with unseeded Australian Wild Card Ashleigh Barty, all won their first-round clashes.