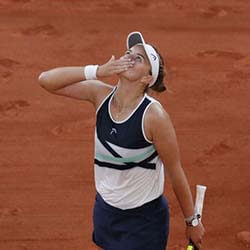 In the French Open final, Barbora Krejcikova has defeated Anastasia Pavlyuchenkova to win her first Grand Slam title. She is the third unseeded women’s champion since 2017. Her goal is now to become the first woman since Mary Pierce in 2000 to win French Open singles and doubles titles in the same year.

She has dedicated the win to her former coach and former Wimbledon champion Jana Novotna who died of cancer in 2017. Her final words to her prodigy were to go out there and win a Grand Slam.

Krejcikova beat Pavlyuchenkova 6-1, 2-6, 6-4 during the final at Roland Garros to win the title. This was her fifth major tournament as a singles player. There were no hard feelings after the game as Krejcikova met Pavlyuchenkova for a hug at the net. This was Pavlyuchenkova’s first Grand Slam final in her career of 52 tournaments that she has played.

Krejcikova believes that during the last few weeks, Novotna had been looking out for her. She was an inspirational coach and Krejcikova hopes that she is just as happy as her given the recent victory.

She had been overwhelmed by the prospect of facing off against more experienced players but has taken it all in her stride to reach this point. While it was clear that she has some pregame jitters before the final but managed to snap out of it. Martina Navratilova handed over the Coupe Suzanne Lenglen to her at the end of the game. A special moment Krejcikova will treasure forever.