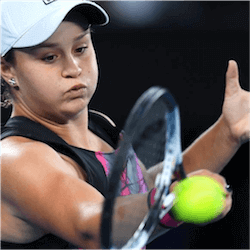 Australia tasted victory in the first round of the 2018 Fed Cup World Group II against Ukraine on Saturday and Sunday, February 10 and 11, and Ashleigh Barty was the major driver behind their success. Although to be fair, Ukraine were missing their World No. 3 star Elina Svitolina, so they were underdogs from the start.

Barty had Aussie punters cheering at the Canberra Tennis Centre when she beat Lyudmyla Kichenok in Saturday’s opening singles match. Then she took a comfortable win in straight sets in her second singles match against Marta Kostyuk.

Her teammate Daria Gavrilova, in contrast, had a terrible tournament. The Aussie star lost both her singles matches – to Kostyuk and Lyudmyla Kichenok’s twin sister, Nadiia Kichenok.

Doubles Match Decided Round on Sunday

With scores level at 2-2, Sunday’s doubles match became the crucial decider. Partnered by Casey Dellacqua, Barty continued to shine as the duo faced the Kichenok twins.

It was another straight-sets affair, and the Aussie pair delivered a crisp 6-3, 6-4 victory to win the round 3-2. It was lovely stuff for tennis fans and sports punters to see, because it’s a stepping-stone to greater things.

Chance to Return to the World Group

Apart from securing another Fed Cup win in their current division, Australia now have the chance to move on to bigger and better. Aussie women haven’t competed in the Fed Cup World Group, the top tier of the tournament, since 2015, but now they have the chance to get into the 2019 Top 8.

They go on to the Fed Cup World Group Playoffs in April, at dates and venues yet to be determined. The winning four teams in World Group II always play the losing four teams from the World Group in this stage, and Australia will once again be hosting.

This time they’ll play Belgium, who played away against France in the first round of the 2018 World Group and went down 3-2. If Australia win the April World Group Playoff, next year will see them back in the World Group to compete for premier Fed Cup glory.