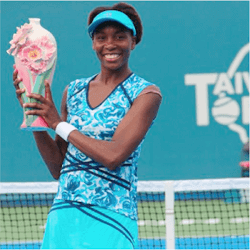 As an event under the auspices of the Women’s Tennis Association, the WTA Taiwan Open debuted in 2016 on the hard courts of Kaohsiung, Taiwan. The USA’s Venus Williams added another jewel to her crown, beating Japan’s Misaki Doi in straight sets in the singles final. The local team of Chang Hao-ching and Chan Yung-jan kept Taiwanese honour intact in the doubles final, beating the Japanese duo of Eri Hozumi and Miyu Kato 6-4, 6-3.

The second Taiwan Open will take place from January 28 to February 05, 2017, on hard courts at the Taipei Arena in the nation’s capital. Williams will not be back to defend her title in the 10,000-seater, but the WTA has announced a main draw of 23 players.  Of these, 21 are ranked in the Top 100 in the world at present, so the tournament promises plenty of high-quality tennis and a plethora of betting options for New Zealand punters.

Some Top Names in Women’s Tennis

Other top seeds in the 2017 Taiwan Open will include France’s Caroline Garcia and Latvia’s Anastasija Sevastova, currently ranked at 24 and 34, respectively. The USA’s Alison Riske is ranked 39th by the WTA, and 2016 runner up Doi is ranked 40th.

But rankings aren’t iron-clad indications of form; anything can happen on the day, and with such a wide array of talent competing, there could be thrills and upsets aplenty awaiting us. If you can’t wait to take a punt on some 2017 tennis, the Taiwan Open could be the event you’re looking for.