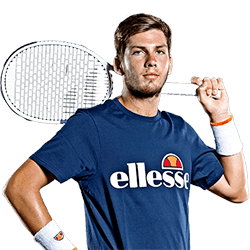 Britain’s Johanna Konta and Cameron Norrie have advanced to the quarterfinals of the Mexican Open. Norrie, who is world men’s number 64, earned a 7-6 (7-5) 4-6 6-3 victory over Argentinian Diego Schwartzman, who is currently ranked at t25th.

Edmund beat the Spanish Tommy Robredo 6-4 6-4 for the second round, making it Edmund’s first win of the year, while Evans bested Uzbekistan’s Denis Istomin 6-4 6-4. Edmund is now set to face Czech Luks Rosol, while Evans will be taking on Colombian Santiago Giraldo.

British Heather Watson was forced out of the women’s draw after she lost to Chinese Han Xinyun 6-4 7-6 (7-4). For the Brazil Open, British doubles pair Luke Bambridge and Jonny O’Mara reached the semi finals thanks to a 6-4 6-4 victory over Belgium duo Sander Gille and Joran Vliegen.

For Acapulco, Norrie will be playing against American Mackenzie McDonald, who is 71st in the world for the quarter finals, while Konta will be facing world number 28 Donna Vekic.  British Katie Boulter withdrew from the tournament after she was forced to retire during her second round match, trailing Sonya Kenin 6-4 4-1 at the time.