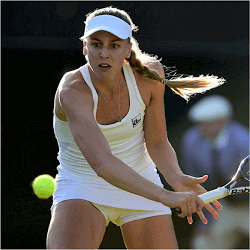 Naomi Broady is set to move into the main draw in the ASB Classic after the retirement of Ana Ivanovic and the sudden withdrawal of Sloane Stephens.

Broady along with American Varvara Lepchenko will now be heading to the Quarter Finals and as an additional benefit gain a few days rest before their next matches.

Broady holds 9 ITF titles and has gained her 88th in the world ranking through her powerful serve and almost 2m frame. She keeps opponents on their toes with her backhand and slicing shots until her forehand can attack.

She made a fantastic showing in the 2016 ASB classic, defeating top seeded player Ivanovic in a huge upset. She went on to defeat Jelena Ostapenko, but not without controversy.

In a fit of frustration during the tough match, Jelena tossed her racket to the back of the court striking a ball boy.

Broady complained to the WTA supervisor who issued a code violation to the Jelena. Broady went on to win her sets but her momentum was eventually cut short by American Sloane Stephens.

With her main rivals from last year having exited the tournament, Broady looks set for an even better performance in the ASB this year.

With 9 singles titles and 13 doubles titles, it is defiantly this tennis star’s time to shine. She has stated that the main reason for her loss in last year’s ASB quarterfinals was due to exhaustion.

With the departure of Ana Ivanovic and Sloane Stephens, Broady will be getting some much needed breaks between her matches, possibly giving her the edge she needs for an even greater showing.

After her quarterfinal defeat, Broady had a 6 game loss streak in the middle of the year. She has clawed her way back up the world rankings however jumping 3 places from 91 to 88.

Broady regrets not spending the time between matches rather focusing on training more. She says that it is hard to find a balance between taking time off to train and improve while still taking part in tournaments to increase her ranking.

She believes that finding the right balance is the key to tennis success.

Her goal this coming year is to break into the world top 50. If she has a stellar performance in the ASB, that goal may just be in her grasp.