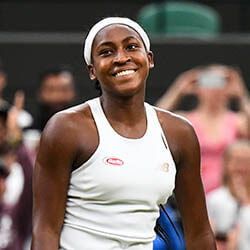 Coco Gauff, one of the most popular players in tennis this year has confirmed that she will be making her way to January’s ASB Classic. The 15 year old stunned the world of tennis when she played at Wimbledon earlier this year, picking up a wildcard for qualifying, and playing all the way to the round of 16 for the main draw. The biggest of her seven matches at the tournament was her shocking defeat of Venus Williams 6-4 6-4 in the first round, a win that was seen by many as a passing of the torch for American tennis.

Gauff ultimately lost to world number seven Simona Halep, but last month she showed that Wimbledon wasn’t a once-off for her as she won her maiden WTA title while playing in Linz, Austria. During the tournament where Gauff had to come through qualifying, she managed to defeat world number eight Kiki Berten for the quarterfinals, along with former French Open winner Jelena Ostapenko for the final round. Gauff would go on to become the very first 15 year old to win a WTA title in 15 years, and there have been many comparisons made between the young player and Jennifer Capriati.

Capriati had won her first WTA event at 14, but had struggled with the pressures of professional tennis at such a young age, and it took her another 11 years to win her first grand slam title. Gauff will be playing doubles in Auckland with Caty McNally.