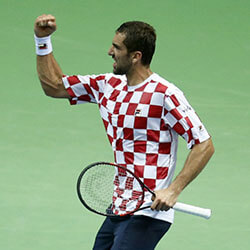 Croatia has moved on to the Davis Cup final after securing victory over the United States with a total score of 3-2.

It was a difficult game for Cilic, and he eventually received a code violation by umpire Carlos Ramos for smashing his racquet on the court. The world’s current number six broke the racquet after a series of errors during the third set as he battled against Querry. He was reprimanded by Querry, but seeing as it was his first offence during the event, no points were deducted.

They are now set to face defending champions France, who recently beat Spain 3-2. Cilic and Coric both claimed opening rubbers during the straight sets that put Croatia in a leading position after opening day. Mike Bryan of America, who retired from Davis Cup tennis in 2016 alongside his twin, Bob, returned to partner with Ryan Harrison for the Saturday doubles. The duo fought hard in a five-hour session to see victory over Ivan Dodig and parter Mate Pavic 7-5 7-6 (8-5) 1-6 6-7 (5-7) 7-6 (7-5).

Both sides have been guaranteed a spot in next year’s revamped Davis Cuo, along with both Spain and France.