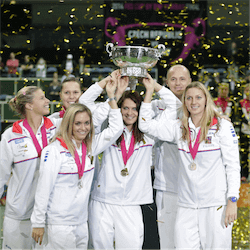 As New Zealand tennis fans switch their attention from the Australian Open to the upcoming first round of the 2017 Fed Cup from February 11-12, it’s time for sports betting enthusiasts to take a look at the form heading into the WTA team tournament. In the Fed Cup World Group, defending champion Czech Republic is the top seed on their current record.

However, the team announced last week has made the Czechs an even more attractive Fed Cup bet. World No. 5 Karolina Pliskova and No. 16 Barbora Strycova are both formidable singles players. They are just as effective as a doubles team, as witnessed by their victory in the 2016 Australian Open.

Strycova, who won three WTA doubles tournaments last year, one of them with Pliskova, is also a previous singles winner at Wimbledon, the Australian Open and the French Open. At the 2017 Australian Open, she has just been knocked out in the fourth round by Serena Williams. Pliskova, the 2016 US Open runner-up to Angelique Kerber, is through to the Australian Open quarter-finals at the time of writing, advancing her to World No. 4 and possibly No. 3 by the end of the week.

Germans Lose Kerber for First Round

Czech Republic will host Spain at home in Ostrava in Fed Cup Round 1, while at the same time France will play Switzerland in Geneva, the Netherlands meets Belarus in Minsk, and the USA takes on Germany in Hawaii.

Unfortunately for the Germans, they will not have World No. 1 Angelique Kerber to bolster their team. Her shock 6-2, 6-3 loss to American CoCo Vandeweghe in the fourth round of the Australian Open has left her plenty of time to get to Maui’s Royal Laihana Resort before the Fed Cup, but she is scheduled to play in the Qatar Total Open, which starts the very next day on February 13.

After discussions between Kerber and the German Fed Cup coach, they decided there was no way she could get from Hawaii to Doha and recover from the jet-lag in time to do the Gulf tournament justice. The good news for New Zealand punters who support her, of course, is that she should be well rested and raring to go in Doha.