Davis Cup – What To Expect In The First Round 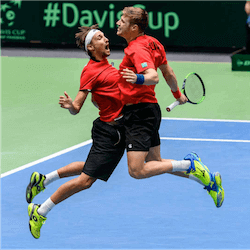 While tennis enthusiasts are recovering from the thrill of the Australian Open, there is a lot more tennis to look forward to this year and plenty of betting opportunities on the horizon. Coming up in less than a week’s time is the first round of the Davis Cup where 16 teams face off in locations around the world. For those who are unfamiliar with the tournament, the Davis Cup is considered to be the World Cup of men’s tennis. The female equivalent is the Fed Cup that offers countries another chance to stamp their dominance on the sport.

The main Davis Cup tournament consists of 16 teams called the World Group and are seeded according to ITF rankings and results of the previous year. The winner and runner of the previous tournament will always be seeded first and second. As the winners of the 2017 tournament, France holds the top seed while Belgium are seeded 2nd as the runners up. The other 14 teams include Australia, Canada, Croatia, Germany, Great Britain, Hungary, Italy, Japan, Kazakhstan, the Netherlands, Serbia, Spain, Switzerland and the United States.

Australia Take on Germany in Brisbane

First Round Davis Cup action will kick off on the 2nd of Feb and run to the 4th of Feb. For New Zealand punters, the highlight will be Australia taking on Germany in Brisbane. Lleyton Hewitt has already spoken to the press about his confidence in his team and the threat of the mighty Germans. While he has yet to reveal who will be joining Nick Kyrgios in the singles, he has the option of Alex De Minaur, John Millman, and Jordan Thompson to fall back on. There is also the belated inclusion of Matt Ebden to the five-man squad.

While Brisbane residents will get a front row seat to the action, the other 14 teams will face off in Albertville France, Morioka Japan, Marbella Spain, Astana Kazakhstan, Osijek Croatia, Nis Serbia and Liege in Belgium. The winners of each tie will progress to the quarterfinals in April.