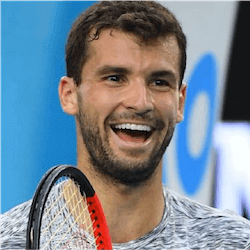 Bulgarian tennis sensation, Grigor Dimitrov has claimed the biggest title of his career. After going unbeaten in five matches, the 26-year-old has won the 2017 ATP Finals on his debut appearance. Picking up 3.6 Million Dollars for his efforts, Dimitrov beat Belgian David Goffin in the final 7-5, 4-6 and 6-3. He will now end the year as the third highest ranked player while Goffin moves up to seventh.

Not taking anything away from Dimitrov, the ATP Finals were missing two of the sport’s biggest names as both Novak Djokovic and Andy Murry missed the tournament due to injuries. Rafael Nadal also pulled out early on in the tournament while the tournament favourite, Roger Federer was brilliantly beating in the semi-finals by Goffin. The season is over for Dimitrov but for Goffin, the Davis Cup will provide another opportunity to prove his worth when he joins the Belgian team against France next week.

The ATP Finals was essentially a rematch of the group stages where Dimitrov had thrashed Goffin. This time around, the Belgian proved to be a much more formidable opponent. Having beaten both Nadal and Federer on his way to the finals, Goffin started the match with confidence. Dimitrov had to scramble to recover two breaks of serve but eventually managed to go ahead with a fifth set point in the 12th game.

The second set turned out to be a much closer affair as Dimitrov missed out on a decisive break. Seizing his chance, Goffin broke the Bulgarian and served out the set to force the decider. The final set was the most thrilling of the match with Dimitrov having to fend off four break points in the very first game. His patience paid off though as he was able to move 4-2 up when Goffin sent a wayward backhand long.

After two hours of play, the Bulgarian contingent realised their man was on the verge of victory and began to chant his name over and over. Goffin had other ideas though and rescued a 0-40 game and three match points. Goffin received a standing ovation from the 18000 strong spectators when he pulled back the fourth point. Dimitrov kept his cool though and finally sealed the match when Goffin fluffed a drop volley into the net.