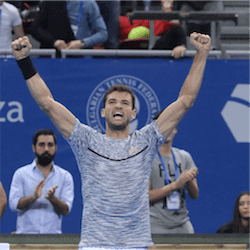 The thin air of Quito challenges even clay court specialists, and the Ecuador Open saw most of the favourites succumb one by one.

Unseeded defending champion Victor Estrella Burgos despatched the No. 1 seed, Croatia’s Ivo Karlovic, in the Round of 16, and the Dominican also defeated Brazilian Thomaz Bellucci, seeded fourth, in the semis.

Second-seeded Spaniard Albert Ramos Vinolas was also knocked out in the semi-final, by third seed Paolo Lorenzi of Italy.

However, Burgos obviously handles the low oxygen levels better than most, as he beat Lorenzi 6-7, 7-5, 7-6 in the final on Sunday, claiming his third Ecuador Open championship in succession.

The top seeds were a more consistent presence at the Garanti Koza Sofia Open in Bulgaria’s Arena Armeec, with a field that included 11 Top-50 players and three in the Top 15.

Although Austria’s Dominic Thiem, seeded at No.1, went out after a shock loss to Georgian outsider Nikoloz Basilashvili in the Round of 16, the second and third seeds, Belgian David Goffin and Bulgaria’s Grigor Dimitrov, both powered their way to the final.

Dimitrov saw off Basilashvili in straight sets in the semis, while Goffin took three sets and a tie-breaker to beat the defending champion, Spain’s Roberto Bautista Agut.

Top seed Marin Cilic, the Croatian World No. 7, was the first victim, falling to Germany’s Dustin Brown in the Round of 16.

He repeated the feat in the final, denying Frenchman and second seed Richard Gasquet his third Sud de France title in a row: Zverev won the match 7-6, 6-3.