First Round Exit for Maria Erakovic at Wimbledon 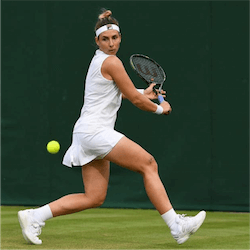 Maria Erakovic, the New Zealand tennis number one has been handed a first round exit at Wimbledon after losing in straight sets to second seed Simona Halep. Barely making it through the qualifier, Erakovic blamed poor serving for her 6-4, 6-1 defeat at the hands of the French Open runner up. Speaking about her defeat, Erakovic admitted that it wasn’t the performance she wanted. She went on to explain that she had a few chances in the first set but was feeling the nerves.

After having been broken in the first set, Erakovic said she played too simply. It was only after she lost three straight games in the second set that she began to hit out and find a bit of rhythm. The first set was hard-fought battle, with Halep eventually taking the set. The second set started badly for Erakovic with Halep breaking her serve on the first game and continuing to dominate the court. Erakovic did manage to get a break midway through the set, but it was too little, too late for the Kiwi.

Speaking to the press, Erakovic said that her serve let her down in the second set. She explained that she wasn’t able to hit her targets with a lot of balls combing back to her, forcing her off her rhythm. She did take some positive notes from it all. She said she gave herself a good chance and over the past 20 days has played a lot of good matches under her belt.

The stats confirm that Erakovic’s serve was indeed to blame for her loss or a least a key factor. The kiwi won just 46 per cent of her first serves and only won 2 out of 15 points on her second serve. After the match Erakovic admitted that her first serve percentage was probably quite low. She went on to explain that she double faulted more than she should have. The stats show she played a total of 5 double faults. This allowed Halep to run around return on her forehand, a play she is very comfortable with.

The big difference between the two was that Halep was moving well on the court, getting more balls back while Erakovic lacked any form of aggression. Meanwhile, Petra Kvitova, the two-times champion has advanced to the second round along with fourth seed Rafael Nadal and defending champion Andy Murry. Aussie player Nick Kyrgios had to retire from his first game with a hip injury after playing just two sets in his opening match. There’s plenty more Wimbledon action to follow, and Sportsbet is offering great odds on all the matches to come.