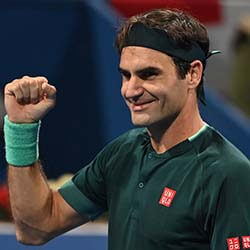 20-times Grand Slam winner Roger Federer says athletes need urgent certainty about whether or not this year’s Olympic Games will in fact continue. The Swiss tennis goat late last week called on Olympic organisers to put an end to the uncertainty around Tokyo, saying he himself was still very much in “two minds” about whether to confirm his attendance.

Set to run from July 23 until August 8 after being postponed in March of last year over the uncertainties created by the global health crisis, the likelihood of the Games continuing as planned this year continues to decline as the number of positive cases continues to surge in host country Japan.

Federer on Friday told a Swiss news station that he’s unsure about what to think about Tokyo. He said that while playing in the Olympics and potentially returning home with another medal for Switzerland would make him exceptionally proud, he would be first in line to understand if the event were to be called off.

The Swiss great however stressed the need for athletes to receive certainly and a final answer from the and from IOC Japan Olympic organisers. He said that while the impression right now is that the Games will happen, there appears to be a common sentiment that the situation remains exceptionally fluid and volatile.

A petition for the cancellation of the Games was submitted to Olympic organisers on Friday, with the 350,000 signatures garnered now raising new doubts about whether the event will actually go ahead as planned.