Federer in Fine Form at the 2017 Dubai Open 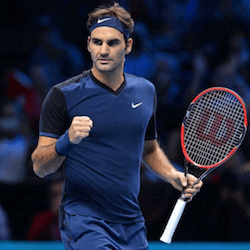 Roger Federer Back in Action at Dubai Open

It is a common feeling among punters and tennis fans. For the past few weeks the tennis courts have felt somewhat empty without Federer slogging it out in his charismatic style of flamboyant tennis. The good news is that he is back in action in the 2017 Dubai Open and causing quite a stir. Since winning his 18th Grand Slam title over a month ago, Federer has been absent from the court. One could argue that since beating Nadal in the Australian open, Federer has achieved what he needed for the start of the year and is already on the back burner.

As it turns out, he is just getting started. In his first match at the Dubai Open, Federer breezed past an erratic Benoit Paire to claim a straight sets win and see him safely through to the second round. After taking a well-earned break, Federer appears to have slipped back into his old routing, giving Paire a solid spanking on Centre Court.

Searching for an Eighth Title

Starting at third seed, Federer got the match off to a good start as he ran Paire around the court in a display of sheer brilliance. There was little resistance from the Frenchman who battled to keep up with the pace and flair that Federer brought to the court. The frustration eventually got too much for the Frenchman who was given a warning for unsportsmanlike behaviour after he hurled his racket into the court. Paire also needed time off to receive treatment for a foot injury but it was all for nought.

Even with the delays, Federer needed less than an hour to send Paire packing. He blitzed past the Frenchman in straight sets with a 6-1, 6-3 win. Federer made a point to thank the crowed in Dubai where is maintains a base and an avid following. Speaking to the press, Federer remarked on how incredible it feels to be back after recovering from his knee injury. He continued saying that it was great to hear the crowed getting behind him as he was getting warmed up. He ended off by saying that the feeling was mutual and that he really missed playing last year.

Next up, Federer will either face Evgeny Donskoy or Mikhail Youzhny in his quest for his eighth title. If he continues his current form, the Swede will have no problems putting another trophy on the mantelpiece. In other Dubai Open news, eighth seed Gilles Muller was booted out in the first round after losing to Philipp Kohlschreiber 6-4, 7-6 (7-1).