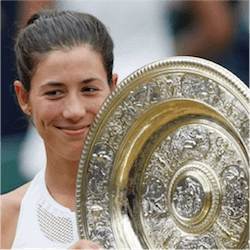 Garbine Muguruza, the Spanish tennis sensation has won her very first Wimbledon title in straight sets against veteran champion Venus Williams. The 23-year-old Spaniard managed to save two set points and went on to win nine straight games to defeat Williams 7-5, 6-0. What started out as a heated contest, ended up being a walk in the park for Muguruza who showed poise, grace and nerves of steel in front of a Venus-friendly crowd.

Venus, a five-time Wimbledon champion, was denied her first major title in nine years, a feat that would have made her the oldest female Grand Slam champion in the modern Open era. For 14th seed Muguruza, this was her second Grand Slam title, after she defeated Venus’s sitter Serena at the French Open in 2016. Despite the relative ease with which she won the match, Muguruza told the press that it was the hardest match of the tournament. She went on to say the Venus is an incredible player, someone who she grew up watching on television.

A Quick Ending to Big Match

After losing to Serena Williams in the 2015 Wimbledon final, Muguruza was able to come back and face her fears head on. In doing so, she has become only the second Spanish woman to win the Wimbledon singles title after her coach Conchita Martinez. Muguruza also has the distinction of being the first woman to beat both Williams sisters in a Grand Slam final. At the start of the match, both woman used their powerful serve to tick away the games. Williams opened the match with an ace but neither player got a firm hold. For the first 40 minutes, it was almost impossible to separate the two as they went toe to toe.

At 5-4 in the first set, Williams had the chance to take control of the match with two set points. The first point went the way of Muguruza after a lengthy 20-stroke rally. Williams bundled the second point, hitting it long, giving Muguruza the chance to pounce and take the first set. Muguruza went on to win the next nine games, completely steamrolling Williams and take an easy win in the end. Speaking to the press, Venus said that she missed her sister. She said she tried her best in the match but thinks there will be plenty more opportunities to come.